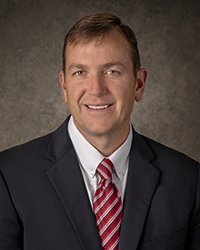 As the 18th president in Utah Tech’s rich and storied history, Dr. Williams is eager and qualified to help the university carve out its niche. He recognizes the importance of moving quickly and methodically when deciding what programs and offerings the institution should focus on, build, and add.

Prior to his arrival at Utah Tech, Williams served as Provost and Vice President for Academic Affairs at Indiana State University. In this position, he worked with all university academic departments and focused on helping students succeed in their studies while attending the university, and he continued to help them as they started their careers.

Before he was appointed provost, Williams was the founding dean of ISU’s College of Nursing, Health and Human Services. In this capacity, he created a vision for a robust college while carving out niche offerings. He also led the effort of developing six new degree programs that were of healthcare workers. Under his direction, school enrollment increased 100 percent and retention went up 21 percent.

Dr. Williams also served as an associate dean of the College of Education at the University of Northern Iowa, where he was a faculty member, executive associate director of the School of Health, Physical Education, and Leisure Services, and chair into his tenure at Northern Iowa, Williams proposed a new baccalaureate degree in athletic training. In three years under his leadership, the athletic training program’s passing rate on the Board of Certification exam was 100 percent, compared to the national average of 27 percent.

President Williams with his wife Kristin and their five children: Bailee, Elly, Braden, Peyton, and Rowen

While at UNI, he helped create a private/public partnership with the local hospital, medical community, and university, which resulted in the construction of a two-story human performance center that served the surrounding rural communities. Williams holds a Bachelor’s of Science degree in Lifestyle Management from Weber State University, a Master’s degree in Athletic Training from Indiana State, and a Ph.D. in Curriculum and Instruction from New Mexico State University. Williams has authored numerous published articles, manuscripts, and abstracts that he has presented at several national conferences. In addition, he has held leadership positions within the National Athletic Trainers Association and other organizations.

A native of Oregon who moved with his family to Brigham City, Utah, when he was 4 years old, Williams has been immersed in the educational system all his life. His father was vice principal of Box Elder High School and his mother worked at Weber State for 27 years. President Williams married his high school sweetheart, Kristin, in 1993, and they are the parents of five children: Bailee, Elly, Braden, Peyton, and Rowen.

Mrs. Williams has worked in the physical therapy field for more than 20 years. She earned a Bachelor’s degree in Physical Therapy at the University of Utah in 1993 and a Master’s degree in Exercise Science at Northern Iowa in 2007